Manuel Rodrigues – the creator of Minigarden

Manuel Rodrigues, born in Guilheiro — county of Trancoso, Portugal — is the creative mind responsible for bringing about Minigarden. Besides being a successful entrepreneur in many areas — industry, commerce, services, and agriculture — Manuel Rodrigues is a nature lover, a liking he assures to have existed since his birth. For him, being close to plants is as natural as having a curious spirit and a sharp mind. Luckily, he has been blessed with keen instincts, which have been useful from when he ploughed his family’s grounds as a kid until now.

Although he is the creator of Minigarden, Manuel doesn’t think of himself as an inventor, but a gadgeteer who travelled to Lisbon at the age of twelve to work and to study business. His professional life is marked by an almost obsessive appreciation for organisation, a characteristic that has set him apart from the competition, consequently, Manuel has been commended for his solutions to the efficiency in the workplace, and in industrial processes. His innate curiosity and nearly genetic love for nature were the boosters of a new project that started at the time of his retirement: Minigarden.

In a room at the official residence of Minigarden, surrounded by vertically potted plants, Manuel Rodrigues talked to me about his life, and futuristic ideas for the Urban Green Revolution that he’s began implementing around the world.

Ana Rosado: Can you tell us the story of Minigarden’s start?

Manuel Rodrigues: When I built the house I live in now, I planned a retaining wall about seven metres tall. Every time I looked up at the wall, I wasn’t keen on the empty space that framed the house, as a result, I decided to think about a solution to change the bare facade. First, I wondered how I would decorate the wall, then, how I would take advantage of the design.
I thought about producing strawberries, because in the summer every grandfather likes to offer his grandchildren sweet strawberries. In the first year, I built a multi-story pyramid from the ground and up the wall, and I placed the strawberries on the vertical structure. The following year, I placed slanted boards — filled with soil and planted strawberries — on the towering wall. That year the strawberry production was a raging success, and I felt inspired to create a more practical setting of the same kind. Thus, Minigarden was born.

AR: When did you realise vertical farming could be more than a way of keeping an active lifestyle during retirement? 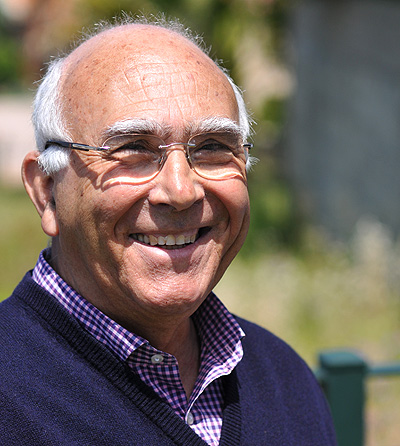 MR: I thought about doing vertical farming because I love plants, and I have always loved them. It’s funny, but I was probably conceived in a field, during a nap time. My parents were farmers and the grain threshing season is in August. Nine months after August comes May — the month I was born in. Almost all the people from my town are born around May.

MR: I was born, and almost immediately after I went to work on the fields, a pleasure I inherited from my parents. Because every one in my family loves plants, I too was influenced to appreciate them. One particular uncle of mine, a true inventor, was really important in the construction of my personality. He never threw away a crock with a broken handle, instead he would fill it with plants.

AR: However, when you built your first vertical farm — influenced by the creative spirit of your uncle — did you think right away it would have a great potential?

MR: Of course. Right at that moment I thought it would be essential to farming, and urban living because there was nothing of the same kind, or I didn’t know of anything else similar to Minigarden, which was proved to be inexistent when I applied for a patent.
My biggest wish was to provide a service, and to equip people with the best tools for this activity, thus contributing to its improvement. When I started Minigarden, I thought much about gardening conditions and how to inspire people to grow and to look after more plants.

AR: So far, what have been the best moments of this adventure?

MR: I have been blessed with many great moments. The first one was when we used Minigarden in a greenhouse because it looked like a laboratory experiment. I don’t know any greenhouses as clean and hygienic as ours. Another beautiful moment was when I picked a fruit that wasn’t touching anything — just hanging — from a Minigarden plantation. In regards to looks and growing conditions, this production resembles an apple tree. This was an exciting moment because fruits in close contact with the ground can become diseased.

AR: You mentioned your parents, your family, and life in the country: how has your love for nature influenced your life?

MR: My family, neighbours, friends, as well as living in the countryside have been important to my life and personal growth. My dad always had flowers in his garden, which is not common in a rural area, and he grew many kinds of plants, some of which I didn’t like: in the beans season, I ate beans every day. Now I love beans. 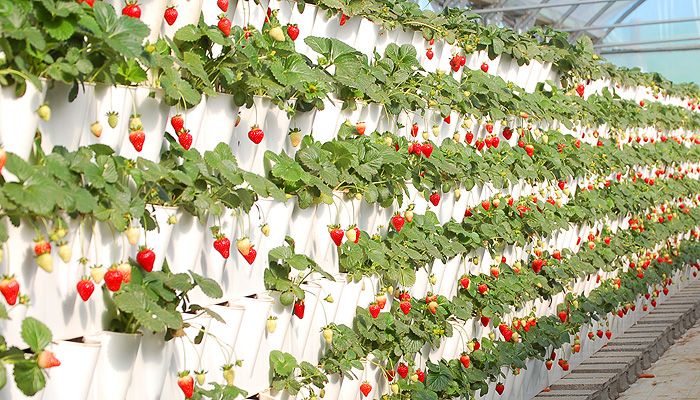 AR: What was the most important lesson you’ve learned from your father?

MR: It doesn’t relate to plants but it’s a lesson that’s stuck to my mind. My dad always fed the animals first before he sat down to eat.

AR: Do you think of yourself as an inventor?

MR: No, I think I’m only a gadgeteer. When I went to work on the fields as a kid, if a part of the plough broke, I’d put together a makeshift alternative. I never returned home because of a broken tool. While I worked in the industry, I also developed industrial procedures to pack faster, with fewer labour, and in the 80s I already had a computerised factory that enabled me to know, by the end of the day, the amount of products in stock.

AR: Do you enjoy working with efficiency?

MR: I mainly like organisation. When I worked in commerce, I created my own code, which fifty years later I still use, to know at any moment who’s the seller of a product, or how much it costs. I had everything labelled and encoded. I still use cryptic labels at home on bottles of wine, and I know how much the bottles cost, and where they were bought.

AR: In what way has nature been present in your professional life since your first entrepreneurial venture? 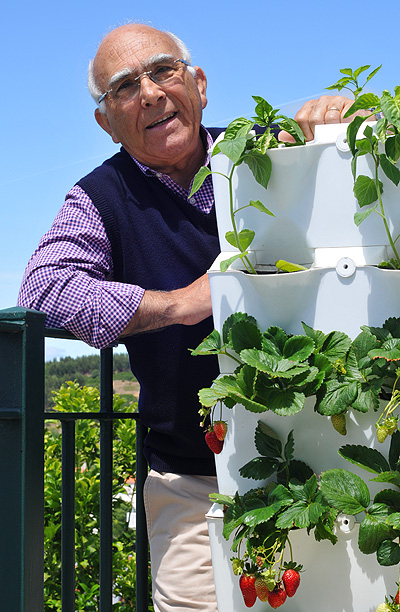 MR: I’ve always managed to conjugate both areas — nature and career. For example, when I built the industrial parks, I was careful enough to garden them. To be honest, I think I was one of the first entreperneurials, more than twenty years ago, to grow gardens in industrial parks.

AR: How do you envision Minigarden’s future?

MR: Minigarden is growing every day, and there are many planned ideas, which will be executed as soon as there’s a chance. We hope to launch a Minigarden with its own irrigation system, and in different shapes.

AR: Do you believe Minigarden contributes to the sustainability of the planet?

MR: Of course I do. Each Minigarden can take up to three plants. In China alone, if we sell one to each person, it’s definitely advantageous to the wellbeing of the planet — Minigarden multiplies plantation.

AR: What is the ultimate Urban Green Revolution?

MR: I believe it’s growing plants without soil or water, which I feel confident will happen in the future: plants floating on air. It is also important to grow plants in garages and big subterranean spaces, which the Israelis are already doing.
On the other hand, as gas prices soar, I think proximity will become an important factor — the closer to home, the better. In this case, Minigarden is excellent because it enables the production of vegetables in your home.
I just can’t understand how some people don’t like plants, the oldest factories in the world.